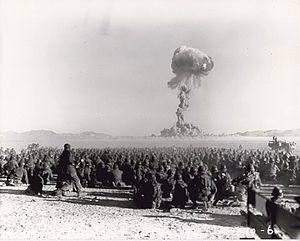 From 1958 to 1992, the UK conducted 24 underground tests at the US Nevada Test Site, on the ancestral lands belonging to the Western Shoshone people.  This Web/inar is coordinated by Juley Howard and explores the impacts of nuclear colonialism with Ian Zabarte, who stands alongside Chief Raymond Yowell (ret’d) as Principal Man of the Western Bands of the Shoshone Nation of Indians in their continuing struggle for true sovereignty and justice.

Map of Newe Segobia, as recognised by the 1863 Treaty of Ruby Valley

On 14 November 1990, four activists, including three Greenham Women who were also part of the Aldermaston Women’s Peace Camp(aign), halted a British nuclear test for new warheads for the Trident nuclear weapons system.  Jane Gregory, Juley Howard, Lorna Richardson and Michael Terry from local American Peace Test group had been given permission by the Elders of the Western Shoshone Nation to walk on their sacred ancestral lands to stop nuclear testing.  Following their arrest and subsequent trial in Las Vegas, the Greenham and Aldermaston Women returned to Britain and organised meetings for Western Shoshone women to speak directly about British-American nuclear colonialism, environmental contamination and violation of their land, rights and sovereignty.  In July 1993, 13 Greenham/Aldermaston Women were arrested for gate-crashing a Buckingham Palace Garden Party with visual materials that highlighted British nuclear testing and abuses against Western Shoshone rights and lands.  When the women stood trial in Bow Street Court, they were supported by Western Shoshone Elder William Rosse Sr., who travelled to London and gave powerful testimony on this issue.

Ian Zabarte (our main speaker) is a long-term political activist by necessity of being a member of the Western Shoshone Nation.  From Duckwater in Northern Nevada Ian has spent decades working with Western Shoshone elders to preserve the Western Shoshone territory – Newe Segobia.  Through organisations such as the Native Community Action Council, the heart of Ian’s work is to maintain the Western Shoshones’ Treaty Rights from the agreement made with the US government at Ruby Valley in 1863.  This work encompasses fulfilling the treaty agreements, environmental and social justice demands of the Shoshone Nation, as well as their rights to conserve and use the land to support the traditional Shoshone lifestyle and to protect Western Shoshone cultural heritage.

Ian has carried on the struggle to stop nuclear waste dumping at Yucca Mountain in the heart of Newe Segobia. He was part of the campaign to successfully end nuclear bomb tests in North America, above and below ground.  Today he stands alongside Chief Raymond Yowell (ret’d) as Principal Man of the Western Bands of the Shoshone Nation of Indians in the fight for true sovereignty and justice. 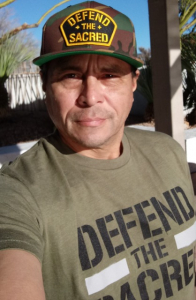 This Webinar is coordinated and facilitated by Juley Howard, Greenham Common campaigner, who took part in actions to stop the UK’s penultimate nuclear bomb explosion in 1990, along with Greenham/Aldermaston campaigners Lorna Richardson and Jane Gregory, Michael Terry from the American Peace Test action group, plus Rebecca Johnson, whose post-Greenham work with Greenpeace enabled this and other nonviolent activism at many nuclear test sites, which contributed to the 1996 Comprehensive Test Ban Treaty (CTBT).

Explore the  Repository at University Nevada Reno relating to the lives of the Dann sisters and the Western Shoshone Defense Project dedicated to maintaining the Shoshone tradition of respect for and life in harmony with Mother Earth. 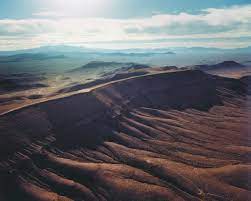