Carole first went to Greenham in protest against at the rainbow bomb in 1961/62 after coming out of care at the age of 16.  She got arrested and spent a week in Holloway Prison alongside Helen Allegranza and Pat Arrowsmith. Years later, she returned on Christmas Eve, 1982 and talks about the guilt she felt for leaving her kids and mum. She recalls breaking into the base and dancing on the silos on New Year’s Day, the incredible barrister Liz Woodcraft representing them in court, hitting her head in the riot van and getting concussed and her second stint in Holloway Prison.

Carole also talks about going to a summit in Geneva with Welsh women to protest and give talks. They were deported after covering a public clock with the alternative time of ‘5 minutes to Midnight’, graffitiing over a picture of naked woman on the wall of the police station and being choked by a police officer when caught.

She feels it is important for Greenham to be remembered, as you can re-direct the traffic literally and metaphorically if you know people have done it before.

Carole had a poem published in No Holds Barred, a collection of poems by women, chosen by The Raving Beauties.

Carole was interviewed by Vanessa Pini in April 2021. 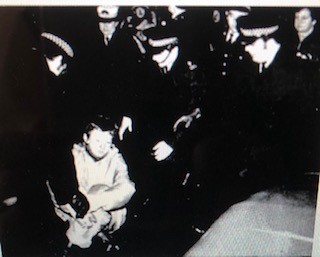