We are so sad to hear of the passing of Greenham Woman, Gillian Booth. Elizabeth Beech shared the following thoughts with us: 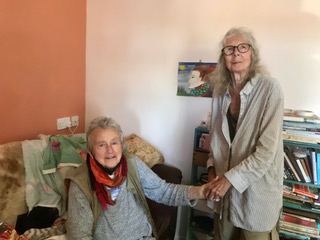 “This is a photo of me and Gill which was taken the last time I visited her. We met at Greenham in 1981 and she was a very vibrant member of the Greenham collective. After Greenham I lived with her in a squat in Hackney and subsequently in a bender at the Dove Centre in Glastonbury.

A larger than life character who was also an excellent craftswoman, painter and poet. Outspoken and direct, she retained her vitality for many years after being diagnosed with myeloma – the 3 year prognosis was extended to more than 10- so it was difficult to grasp that she had died – she seemed to be invincible. Though in the last 3 months her health was very poor.  I will never forget her and loved her very much.  Go well Gill!”

We were privileged to interview Gillian, alongside Hazel Pegg in 2019. Listen here.