Land Occupations and Direct Action: From Greenham to HS2

We have been fortunate to work with an amazing young woman recently. Wren* has been involved in the HS2 occupations and protests and here she explains a little about what’s happening along the HS2 line and how protestors have been inspired by the GreenhamWomen’s legacy.

*the name she has chosen to use

High Speed 2 is the proposed new railway network connecting major cities in the North to London, funded by billions of pounds of tax-payers money. It is a major construction project that requires not just building the railway itself, but all the required infrastructure such as factories and access roads and reopening closed quarries. This government-backed enterprise has been given the powers to compulsory purchase of any land and property in its way, and to flatten any existing eco-systems, homes and livelihoods.

If you have heard anything about HS2, you will probably have heard that its environmental impact is catastrophic, with the original route affecting 108 ancient woodlands. I hardly feel it necessary to explain here why the destruction of habitats is a bad thing and why we shouldn’t be chopping and chipping the trees which provide our oxygen. Instead through this piece, I would like to explore the mechanisms which make this obscene project possible and begin to understand where it sits within a global context of land and social exploitation.

HS2’s greenwashing strategy goes somewhat like this: the project will be ‘net zero by 2035’ and will reduce the number of cars on the road and reduce the need for air travel. This strategy – which they say justifies the mass destruction of habitats and community spaces – can quickly be refuted.

Firstly, these net zero claims have been widely discredited as they do not factor in the embedded carbon emissions from the construction of HS2 into this calculation – which HS2 estimated in 2019 to be around 1,451,000 tCO2e (tonnes of Carbon Dioxide equivalent). As for air travel, if HS2 was really aiming to reduce air traffic, then why has the route been designed to connect major airports? And why are these airports actively lobbying for it? Current ticket price projections sit between £180-£240 for a journey from London to Manchester. This extortionate price far exceeds the cost of driving, doing away with any hope that it’ll take traffic off the roads.

If carbon neutrality and getting cars off the road was a genuine motivating factor, railway transport would need to become the cheapest, most accessible form of transportation. Nationalisation of the railway network would need to be taken as a serious proposition, rather than a laughable socialist policy. It begs the question, why are public infrastructure projects – paid for by public money – being delivered by private companies and in line with their private interests? As it stands, HS2 is simply pushing more private investment into a railway network that is already beyond the economic reach of most – primarily serving major cities in the south, business hubs and airports – and further compounds socio-economic issues at the heart of the environmental crisis.

But this is not just about the environment and the loss of trees – and this is not just about a railway. The heart of the problem is systemic, an issue of land justice, corporate dominance and class divides. When you explain the project to people, they often look confused and say, ‘Well this doesn’t make sense… Why would we need another train from London to Birmingham when there is already a perfectly usable service?’

It is because this project has been conceived as an excuse to grab land and dish out construction contracts to those already at the top, regardless of whatever and whoever this displaces. So do not be surprised when it doesn’t make sense as a public infrastructure project – because that is not what it is. It is part of a long legacy of projects which displace people and habitats – locally and globally – to consolidate corporate power. Projects such as these have already had a devastating impact on the Global South, decimating indigenous lands and driving through poor and rural communities. Through mines, dams and oil explorations which provide for Western consumerist fancies, corporations continue to uphold a system of colonialism and slavery which reaches far beyond the empire. Now that land and resources are becoming scarce, Western corporations are resorting to the colonisation of English soil.

HS2 is a land grab. Around 3/4 of the land seized is being used during the construction period of the project – and then what will happen to it? What will happen to the sites where ancient woodlands have been chopped down? These once protected sites are now destined to become brown field development sites – ripe for the construction of shoddy, un-environmental housing right next to the train line for unaffordable prices. Take Euston Square Gardens. The only mature trees on one of London’s most polluting roads have been destroyed to make way for a temporary taxi rank to serve Euston Train Station whilst HS2 is being built. Once the train is built, this once open green space will be hard-standing – prime London real-estate.

Land is being acquired by Compulsory Purchase Orders. CPOs are a legal mechanism by which government sanctioned ‘acquiring bodies’ can acquire property or land without the consent of the owner, under terms essentially set out by said acquiring bodies. One of these terms is that compensated parties must sign a Non-Disclosure Agreement. This document is designed to keep cost prices and commercially sensitive details of a project confidential – and are fondly known as ‘gagging orders.’ Through a Freedom of Information request it has been revealed 253 companies and public bodies have signed NDAs. It is undisclosed the number of individuals who have signed NDAs in order to receive compensation after being forced to leave their homes. As you can imagine, the process of having your home and/or livelihood seized is deeply traumatising – particularly as compensation reflects the projected value of property after the construction of HS2 and depends upon your compliance.

Seeing the destruction caused by HS2 is gut wrenching. The effect on habitats and wildlife is unthinkable at this pivotal moment in the climate crisis. However, the opposition to HS2 must go beyond acknowledging the environmental destruction and the treatment of HS2 as a single issue. Systemic inequalities, corporate unaccountability and centuries of disenfranchisement from our lands are what makes HS2 – and other construction projects globally – possible.

Protests have happened along the proposed line in the form of pop-up protests and long-term occupations and resulted in numerous publications and artistic responses. Camps are positioned along the route and provide an opportunity to occupy land, asserting our rights to exist on our land. Clandestine structures and ramshackle defenses are built in the hope of causing HS2 a lengthy and costly eviction. There have been two tunnel protests exceeding 4 weeks and numerous tree occupations and compound blockades. Hundreds of people have been initiated into activism and direct action.

Wren says, “We have Greenham Women to thank for their legacy land occupations and their determined actions which prioritised their own morality above the law. This archive and the stories from Greenham Women have been a source of inspiration and a place to learn from our rich protest history. We must particularly thank the Greenham Women who are still protesting alongside us. We are extremely grateful to both the Welsh Kitchen who have travelled around the camps providing us with the warmth and comfort of home cooked food, and to Sarah Green for her tireless work in the Colne Valley exposing the effects of HS2 on London’s drinking water.’

Currently Bluebell Woods Protection Camp is the largest HS2 camp on the line. We are being threatened with an unlawful injunction with the aim of preventing our frequent protests of gate blocking at our local compound, threatening those who break the injunction with thousands of pounds worth of fines. We recently received a 28-day notice period for the eviction of the camp – meaning bailiffs could storm the site any day from the 24th March, followed by chainsaws.

Any support for Bluebell would be appreciated – whether in the form of donations, supplies, sharing this post, coming to camp or just chatting to your friends about the project and why it should be opposed. Westdown Quarry Camp near Frome has also popped up recently and are equally looking for support.

Campaigners from the HS2 Link

If you’d like more information, or to support protestors resisting the construction of HS2 please check out these links: 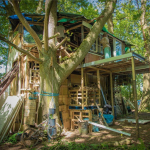 Main living structure at Bluebelle Woods Protection Camp. Our aim with building one centralised structure was to reduce the effect of the camp on the surrounding woods. 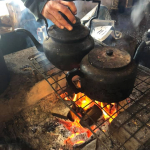 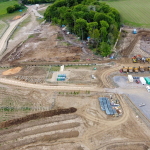 Ariel image of Jones Hill Wood after felling and the construction of a compound at the site. Jones Hill was the site of sustained protests, including an 8 day tree eviction, disruption to felling and legal battles against HS2’s unlawful activity. 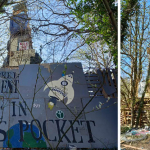 Defensive structure on the line of HS2 fondly known as The Temple at Wendover Active Resistance Camp. The structure had 9 floors, numerous lock-ons and an underground tunnel network below. It was occupied by 8 people and the eviction took 5 weeks in total.