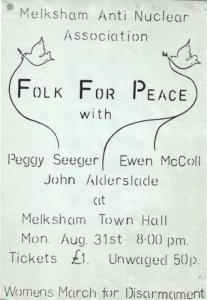 Locals that remember the march coming to town, took part, or want to learn more about it, are being encouraged to attend the ceremony, which will be held in King George V playing field from approximately 6pm to 8pm.

At the event, the town will be presented with a plaque and a honeysuckle plant, which is commonly found at Greenham Common. There will also be entertainment and a talk about Greenham and its relevance today.