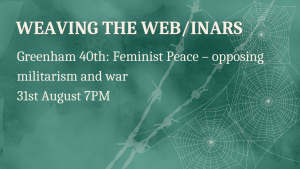 The Greenham 40th anniversary Weaving the Web/inars online march continues with a conversation among activists from the Greenham Women’s Peace Camp and Women in Black (WiB) on ‘feminist peace’  and the different ways we have opposed violence, military-industrial oppression and war in our countries and across borders.

With speakers from WiB in Haifa, Belgrade, London and Cape Town, we will explore the personal and political connections in feminist peace activism.  What are the different ways of being visible and effective?  How can we best centralise the needs and experiences of women and girls and take responsibility when living in aggressor nations?  How do we perceive the links between patriarchal power, militarism, sexual violence, and rape as a war crime?  How do we support each other and draw strength to keep going?

This webinar will take the form of a moderated conversation, including:

Rebecca Johnson, a feminist, peace and lesbian activist, carrying Greenham’s feminist nonviolence into campaign strategies and songs for security, justice, sisterhood and disarmament, including with Women in Black since 1989.

Hannah Safran, a lesbian, peace and feminist activist with the Haifa Feminist Center and Women’s Coalition for Peace, as well as opposing the Occupation with Women in Black since 1988, and through her research and teaching.

Lepa Mladjenovic, lesbian feminist anti-war activist, with Women in Black Belgrade from 1991, insisting on solidarity and collective care in difficult times.
Sian Jones, with other Greenham women, accidentally established Women’s Aid to former Yugoslavia (WATFY), taking humanitarian aid and solidarity to anti-war/anti-nationalist groups supporting refugee women in Slovenia, Croatia, Bosnia-Herzegovina, Serbia and Kosovo during the 1990s wars.
Liz Khan, feminist peace activist with Hackney Greenham Women’s Group in the 1980s and a co-founder of Women in Black London, which took the name in 1993 to support connect with WiB activists in Belgrade and Palestine-Israel.

Vanessa R Ludwig, African feminist, who continues to work towards the dream she had as a ‘young revolutionary in the struggle’ in the 1980s for a free Afrika and a peaceful, just world.
Greenham 40th Feminist Peace webinar background doc for website docx
Tickets here
Zoom link will be emailed to all ticket holders 30 mins before event begins.